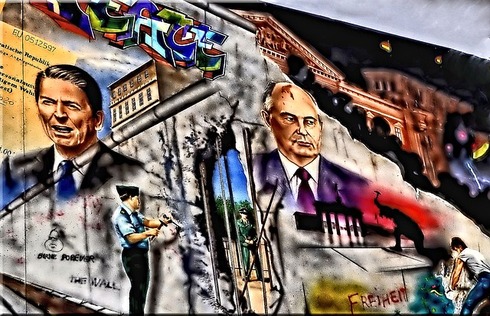 Through his eight years in office, President Ronald Reagan created and implemented policies and programs that have gone on to shape the country for decades. While his legislative impact is undeniable, Reagan's words are almost as emblematic of his presidency as his actions. Known as the Great Communicator, Reagan earned that title in his speeches and famous orations.

Reagan's speeches have inspired generations, in a variety of ways — from jumpstarting future leaders' political careers to motivating the creation of Reagan.com's private email service to protect your privacy in the name of the former president and his values. Ronald Reagan's distinctive rhetoric and ability to adapt his tone and message to suit the country's evolving needs made him an unparalleled communicator as well as an effective leader.

In 1964, Ronald Reagan took to the television airwaves for a speech in support of Barry Goldwater's presidential run. "A time for choosing" emphasized Reagan's focus on the choice Americans had to make with that and other elections — not between parties, but between the paths for the county's economic success or failure. That address catapulted Reagan to national prominence and helped him launch his own political career. Watch below:

Ronald Reagan pushed back against then-incumbent President Jimmy Carter in the final debate for the 1980 presidential election. After Carter blasted Reagan's stance on healthcare, Reagan issued a fiery rebuttal that not only articulated his actual positions, but the "there you go again" speech also demonstrated his no-nonsense approach to confrontation. Watch below:

With the famous line "Government is not a solution to our problem; government is the problem" in his first inaugural address in 1981, Reagan set the stage for his pending presidency. In this and many speeches to come, Reagan emphasized the power and responsibility Americans have for self-rule.

Reagan invoked poet John Gillespie Magee to immortalize the victims of the Challenger Seven tragedy. He quoted from Magee's sonnet "High Flight" to comfort a nation in mourning after the 1986 tragedy.

Reagan's 1987 speech at Brandenburg Gate in Berlin included a direct challenge to then-Soviet leader Mikhail Gorbachev to dissolve the controversial barrier between East and West Berlin in which he announced "Mr. Gobachev, tear down this wall". Two years later, Gorbachev followed suit and began demolition.

Join the thousands of other Americans who continue Ronald Reagan's legacy of inspiration and common sense. Sign up for a Reagan.com email address today!