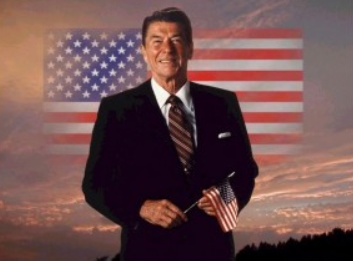 President Ronald Reagan’s gift for delivering engaging speeches and penning heartfelt essays and articles earned him the apt moniker “The Great Communicator.” Of all the topics that President Reagan spoke so eloquently and wrote so passionately about, the one subject that truly resonated with him was his patriotism.

From motivating his fellow Americans to buy war bonds during World War II to delivering impassioned speeches at Arlington National Cemetery to honor our fallen soldiers on Memorial Day, our nation’s 40th President always wore his patriotic heart on his sleeve. Apart from Christmas Day, Ronald Reagan’s favorite holiday was the anniversary of our nation’s birth: The Fourth of July.

In July 1981, while still recovering from the near-fatal wounds he suffered earlier that year from a would-be assassin’s bullets, President Reagan found the strength to write a sincere reflection of what the July 4th holiday meant to him. In his piece for Parade Magazine, Ronald Reagan not only gives us a nostalgic snapshot of July 4th memories of his Midwestern childhood, he reminds us that there is more to this holiday than backyard barbecues and fireworks displays.

History books often overlook the personal and financial sacrifices that our founding fathers made in their quest to secure our country’s freedom. In his July 4th essay, President Reagan shines a spotlight on them. He writes, “They were soft-spoken men of means and education; they were not an unwashed rabble. They had achieved security but valued freedom more. Their stories have not been told nearly enough.”

By telling their story, Reagan’s words cause us to step outside our own circles and reflect on the brave men and women of our armed forces who currently sacrifice so much to ensure that our nation remains free. In his own way, President Reagan makes us realize that the 4th of July is not just a celebration of our nation’s past and its declaration of freedom from tyranny; it’s also a reminder that to ensure that our country remains free we must all do our part to support it and protect it from threats both foreign and domestic.

In his essay, Ronald Reagan says about July 4th: “I’ve come to think of that day as more than just the birthday of a nation. It also commemorates the only true philosophical revolution in all history.” This philosophical revolution extends into our everyday lives here in the 21st century where we strive for freedom from government overreach and the prying eyes of big corporations that try to use our data. Creating your private email account at Reagan.com is one way to both honor President Reagan and take a stand against those who try to limit your privacy and freedom to communicate.

Before signing-off, President Reagan shares one final piece of wisdom with us:

“Let the Fourth of July always be a reminder that here in this land, for the first time, it was decided that man is born with certain God-given rights; that government is only a convenience created and managed by the people, with no powers of its own except those voluntarily granted to it by the people. We sometimes forget that great truth, and we never should.”

Independence Day celebrations across America are a yearly reminder of our forefathers’ fight against tyranny. We may no longer face King George III, but we struggle each day to preserve our privacy in the face of Surveillance Capitalism. When you sign up for a private email address at Reagan.com, you take a stand for your personal liberties and can rest assured that your private communications will be protected online. Start your account today!