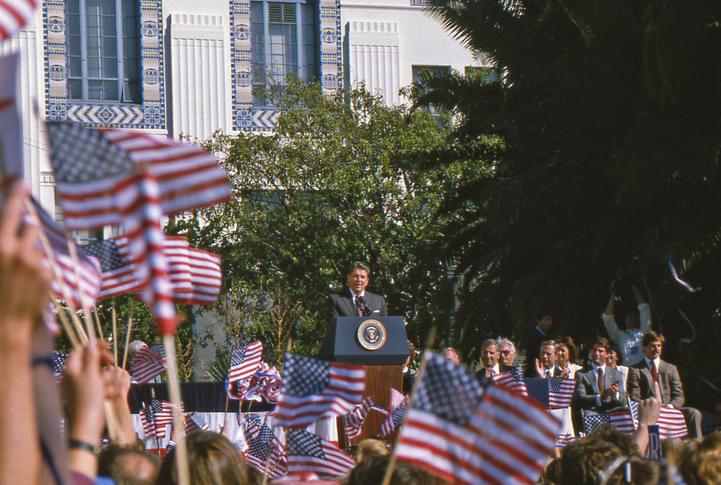 Why is Ronald Reagan called "The Great Communicator"?

Ronald Reagan, who was known as The Great Communicator, has been deemed one of the best public speakers in American history, and for good reason. The impact of his nickname as The Great Communicator not only was central to his presidency, and all that he was able to accomplish during it, but his unparalleled communication skills and approaches—perhaps developed during his time as a Hollywood actor—went on to shape decades of future political leaders.

So, just how did the phrase “Ronald Reagan, The Great Communicator” come to be? He had already solidified the title by 1976, when it was referenced in a column in the

By that point, Reagan had spent eight years as governor of California, a role he was in part propelled forward into after a famous speech he gave in support of then-presidential candidate Barry Goldwater in 1964. Known as “A Time for Choosing,” that speech, in which he emphasized the effect of small government, raised $1 million for the candidate and was a major boost to Reagan’s own political aspirations.

During his terms as governor, Ronald Reagan solidified his reputation as a strong speaker, skills he used to set his sights on the White House. He delivered a number of speeches during his campaign that were both fiery but also familiar. For instance, in his last debate with President Jimmy Carter before the 1980 election, Ronald Reagan directly addressed American voters watching the television event, a tactic Carter failed to do. Just who was The Great Communicator trying to reach with that speech? Not only Republicans, but also all American voters who were eager for a president who spoke directly to—and, by extension, worked directly for—them.

Once he secured the presidency, that tendency to passionately address the American people continued, from State of the Union addresses to times of crisis and everything in between. Ronald Reagan’s capacity to connect with countless Americans at once inspired future leaders to tap into the power of television and other means of instant communication to spread their message—and to use the momentum encouraged by those mediums to build their policies and platforms.