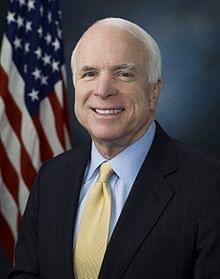 About 20 years ago, Sen. John McCain delivered an address at the Ronald Reagan Presidential Foundation's Reagan Forum that embodied both his and Reagan’s views on the future of the country—lessons that are just as applicable today as they were two decades ago.

The iconic McCain Ronald Reagan speech centered on the lessons the senator drew from Reagan’s leadership, including throughout the Vietnam War, during which McCain was a prisoner of war. Even when he and his comrades were locked away and tortured, McCain said, they took heart in the news that Reagan, then governor of California, and his wife were fighting for them. The spirit behind that work, he said, was Reagan’s unwavering faith in the promise of the country, an idea that was especially needed at the time, as America was struggling with vast social and economic upheaval.

“The great, robust, missionary democracy that had given its name to the century was perceived to be exhausted. Ronald Reagan believed differently,” McCain said in his Ronald Reagan speech. Reagan countered the cynicism abounding in the country by envisioning a future based on the four pillars that later defined his presidency: preserving individual liberty, promoting economic opportunity, advancing democracy to those struggling with tyranny and spreading pride in our national heritage. The first three, McCain said, can largely be credited for turning the country around and bringing about the widespread social peace and economic prosperity the country was seeing at the time of his speech in the late 1990s. However, that fourth pillar, McCain said, remained a bit elusive.

“I worry that we do not see, as clearly as we once saw, that we are a part of a great experiment,” he said about America, which he noted is a country “that is forever becoming something.” These ideas are especially salient today, when we’re at a time many have compared to the upheaval of the 1960s. The McCain Ronald Reagan speech predicted that the best antidote to that disarray is a better investment in civic life—voting, running for office, supporting the military—driven by a belief in the strength of the country and its future.

As McCain said: “The power of faith in our heritage is overwhelming, and it is, as Ronald Reagan knew, the greatest strength of American life.”